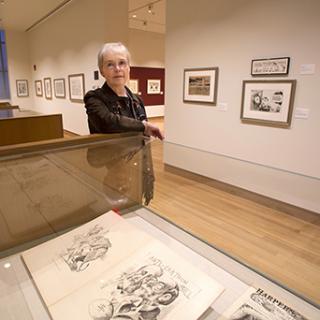 Professor Emeritus Lucy Shelton Caswell worked at Ohio State from 1970-2010. A “heroine of the cartoon world,” Lucy became curator of the Milton Caniff Collection in 1977, recognized the Collection as the “first of its kind” and seized the opportunity for Ohio State to lead the field. She developed the single collection of cartoon art into a preeminent archive that is the world’s largest collection of cartoon art, the Billy Ireland Cartoon Library and Museum. She founded a Festival of Cartoon Art in 1983, helped acquire the archives of the Association of American Editorial Cartoonists and the National Cartoonists Society, and negotiated the transfer of the San Francisco Academy of Comic Art Collection – 75 tons of comic strip pages and clippings. Lucy was instrumental in fundraising for the Billy Ireland Cartoon Library and Museum; the lead gift was made in recognition of a book Lucy published about the donor’s grandfather, Billy Ireland, and another donor provided a challenge gift and requested a reading room be named after Lucy Caswell in recognition of her work. Lucy continues to volunteer at the university and is a founder and VP of Cartoon Crossroads Columbus (CXC), a new city-wide comics festival. 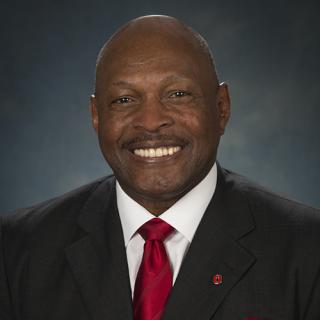 Buckeye football legend Archie M. Griffin has dedicated more than three decades of service to The Ohio State University. His commitment to paying forward makes him one of the most renowned ambassadors for the Scarlet and Gray.

The only NCAA football player to win the prestigious Heisman Trophy twice, Mr. Griffin is a three-time All-American and the first player to start in four Rose Bowls. The former Ohio State running back is included in the NCAA’s list of the 100 Most Influential Student-Athletes and has been inducted into both the College Football and Rose Bowl Halls of Fame.

After earning his undergraduate degree from Ohio State in 1976, Mr. Griffin was selected in the first round of the NFL draft by the Cincinnati Bengals. He served as co-captain and played for the franchise for seven years, yet his heart remained with the Buckeyes.

He returned to the university in 1984 and served for 20 years in the Department of Athletics, followed by 11 years as president and CEO of The Ohio State University Alumni Association. While at the alumni association, Mr. Griffin focused on two of his greatest passions — community volunteerism and providing assistance for longtime, new and future alumni.

He spearheaded the creation of the Bill and Susan Lhota Office of Alumni Career Management and established the Archie Griffin Scholarship Fund, benefitting Ohio State’s Olympic sports programs. He and his wife, Bonita, formed the Archie and Bonita Griffin Foundation Fund to develop sports, educational and travel programs for youth in central Ohio. And in 2014, his commitment to service helped bring the Office of Volunteer Relations to life. Through this office, members of Buckeye Nation can easily connect with a variety of ways to get involved and make a difference.

After he retired from the alumni association in 2015, Mr. Griffin served the university as a senior advisor within the Office of Advancement through the end of June 2017. A sought-after speaker and humanitarian, he also continues to support and advise a number of boards and foundations. 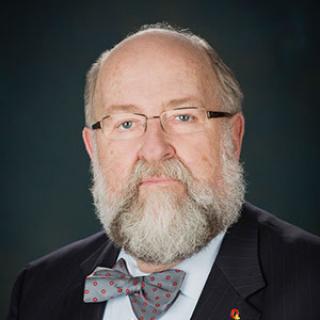 Richard (Dick) S. Stoddard worked at Ohio State from 1978-2015. An Ohio State alumnus, Dick began his Ohio State career as Director of Undergraduate Studies and Department Administrator in the Department of Political Science, building the foundation of what remains a high-profile department. He then served as Special Assistant to the first three vice presidents of the Office of Research. From 1995 until his retirement, he worked with Presidents Gee, Kirwan and Holbrook as a Special Assistant, Director of Federal Government Relations and then Vice President for Government Relations; in these capacities he represented Ohio State on a national level, including work with the Kellogg Commission on the Future of State and Land Grant Universities, the APLU, the AAU, and the Big Ten. Dick was praised for his ability “to see both the general and the specific of virtually all university issues…there has been no one any better at facilitation in the University’s modern history than Dick…In terms of…selfless commitment to the institution…he is truly remarkable and in a league of his own.”